In February 2019, rock band Muse set out on their Simulation Theory World Tour, which started in Houston and ended up in Lima. The tour was based on their rock-synth-pop album of the same name, which explored science fiction and virtual reality and featured one particular track called The Void (a track that was subsequently used as the theme music for the BBC’s The Planets series with Brian Cox).

Anyway, to cut a very tenuous link short, fast forward almost exactly a year and people and businesses the world over are having to tackle what has been described as the biggest global health challenge of a generation.

The coronavirus outbreak has and will continue to have major and multi-faceted implications for the comms industry, of course – but it’s one that I think offers opportunities as well as challenges. Here are a couple of thought that spring to my mind, a few weeks into the crisis…

On the one hand, organisations should not be strangers to crisis management, and the coronavirus has provided them with an opportunity to turn those crisis ‘simulation theories’ (I said it was a tenuous link) into a reality. It’s been really interesting to see organisations in the international financial services world I work in roll out their business contingency plans – and by and large I’ve been really impressed with how it’s been done.

This is a crisis unlike others that most firms might have ‘simulated’, such as a cyber hack or a environmental disaster - this is a crisis of real magnitude – it’s global, impacting all firms, who might be suppliers or clients to many others, in countries around the world, all of whom are also rolling out their own contingency plans.

And it’s been really positive to see how many firms have clearly placed good communications at the core of those plans. Those firms who have been able to tell their staff, stakeholders, media and clients what they are doing and why, clearly, quickly and concisely have I think emerged well from a reputational point of view.

It’s been a difficult task particularly because a lot of the firms I’ve been speaking to are in multiple jurisdictions, experiencing different perspectives of the same crisis and where the advice of governments and authorities often differs to other locations they operate in. It’s hugely complex.

It reinforces I think just how important it is to have a good solid robust comms element to a crisis and business continuity plan, so that when it comes to turning simulation into reality, things don’t necessarily feel so scary.

Then there’s the opportunity. One of the biggest impacts to the corporate comms world has been on the events sector – travel bans and company event attendance policies have meant that events and large flagship conferences from MPIM in Europe to STEP in the US have ended up being either postponed or cancelled altogether.

It’s a massive blow for an industry valued at more than $1trn globally – with billions expected to be wiped off the industry in the wake of the virus outbreak.

As well as being devastating for the industry, it’s also ended up leaving a massive void (there’s that tenuous link again) for marketing, BD and comms teams who would have spent considerable resource and time on these events.

Suddenly the means by which firms would have sought to hit their targets has been stripped away, and teams are suddenly left unable to do their principle job – network, make connections and drive awareness of an organisation’s proposition.

But I think there’s an opportunity here for comms teams to work collaboratively with BD and marketing teams to find new and creative ways to fil that void. We’ll probably see firms focusing a lot more on content creation over the coming weeks as BD teams look to find new ways to make ‘virtual’ connections, but to cut through that spike in content, they will need support and expertise.

Can they reach that audience in different ways, can they draw on technology such as video, webinars and virtual events to deliver their messages, for examples, does this desk time give them an opportunity to focus on creating or developing that idea that they otherwise wouldn’t have got round to, could they divert event expenditure to another cause in the community - perhaps to support those most impacted by the virus.

Whatever, the value expert and professional comms teams can add as organisations look for other ways to enhance their visibility provides a good opportunity.

Of course, the impact of the coronavirus is far more nuanced and wide ranging than I have set out here – but a couple of thoughts that have occurred to me over the past few days. 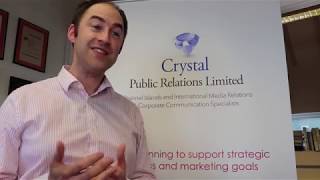